Capital receives annually Amver Awards from the U.S. Coast Guard for its managed vessels "in recognition of outstanding dedication to the Automated Mutual-assistance Vessel Rescue System in support of world maritime safety". Capital was commended by the US Coast Guard for providing a worldwide safety network to assist search and rescue coordinators in responding to emergencies at sea in 2021 receiving 50 Amver awards.

In 2022 six Capital managed tankers were awarded the QualShip 21 award by the U.S. Coast Guard.

After the successful rescue of 153 persons on September 23, 2021 from a wooden vessel in distress, the Master, Officers and Crew of M/T Aristofanis managed by Capital received commendations by the Republic of the Marshall Islands Maritime Administrator, The Hellenic Coast Guard, as well as a Honorable Mention Award at the Tanker, Shipping and Trade Awards 2021.

The quality of the Capital Ship Management services and its excellent 'HSSE' (health, safety, security and environmental) operating record was highlighted again when Capital received the 'Safety Award' at the annual Lloyd's List Greek Shipping Awards for 2021 both for its successful rescue operation, last September, during which 152 human lives were saved by its managed tanker vessel “Aristofanis”, and for its overall commitment to high technical and operational safety standards in relation to its vessels and personnel onboard and onshore. Capital Ship Management, over the past five years, has rescued more than 500 people displaying overall an excellent security track record while its HSSE protocol is an integral part of its business model.

In July 2018, Capital was selected in the list of "The Most Admired Enterprises in Greece" at the Diamonds of the Greek Economy Awards by New Times Publishing.

In June 2018, Lloyd’s Register of Shipping presented Capital with an ‘Attestation’ relating to ‘Excellence in Ship Management and Operations’.

In April 2017 Capital received a Certificate of Appreciation by the Australian Maritime Safety Authority.

In March 2017, Capital completed the first accredited assessment wordwide of their MRV monitoring plan by LRQA in accordance with MRV Regulation (EU) 2015/757.

In April 2016, Capital was awarded the GREEN4SEA Excellence Award 2015 for demonstrating environmental excellence and performance above average.

In December 2015, Capital received a Letter of Commendation by the Spanish Maritime Action Force regarding the successful participation of M/T 'Amore Mio II' in Spanish Navy exercises.

In March 2015, Capital was awarded an 'Active Greece' award by the Greek Active Business Publishing Group and Statbank for its worldwide distinction as a Greek-owned company.

In May 2014, Capital was the first company worldwide to receive independent verification and certification by Lloyds Register of Shipping in accordance with the "IMO Strategic Concept of a Sustainable Shipping Industry» ensuring effective measurement of progress and client awareness of key performance indicators as well as supporting LNG as fuel in a joint development project.

In 2014, Capital was awarded the Amver 'Special Rescue Award' by the U.S. Coast Guard and a 'Certificate of Commendation' from the Republic of the Marshall Islands, for the successful rescue of 163 refugees on June 7, 2014, south of Malta, by M/T Arionas.

In the past years, Capital vessels have been repeatedly awarded BP Shipping Top Performing Vessel distinctions.

Capital was also selected as "Tanker Company of the Year 2009" at the annual Lloyd's List Greek Shipping Awards. The company adopted and implemented additional standards during 2009, including business continuity management principles, and received the Lloyd's Register certification for its Integrated Management System, both contributing factors to its winning this award. 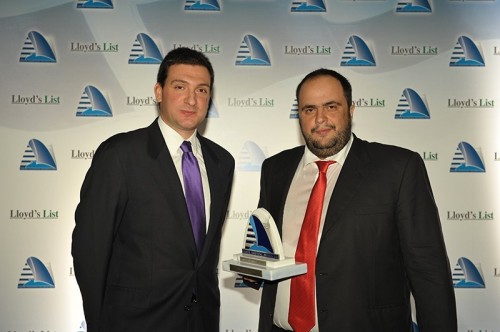